Everyone loves a novelty holiday themed chocolate. Actually, I don't love them too much because they seem so intent on ripping me off. But I do have a soft spot for some, such as the Lindt bunny, and the Maltesers bunny. Maybe I just can't be mad at a bunny. 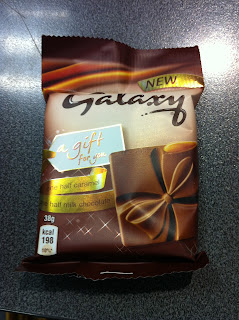 So here we have Galaxy's attempt at the Christmas themed chocolate, and look at that, it's a present. Everyone loves presents. As well as stating that it is in fact a gift for the person who is about to eat it, it likes to tell us that it's "New", without also stating the obvious that it is "Not going to exist in a couple of months"

We are also told that in fact this present is half caramel, half milk chocolate, which is clearly a lie, because one half isn't just pure caramel, it's caramel covered in chocolate. What results is a veritable Russian Roulette of trying to find out which half has the caramel and which doesn't, depending on whether you prefer caramel or not. Or perhaps you can just try and fit the whole thing in your face without getting any spittle mixed with chocolate on the floor. Let's call that game American Roulette.

There's not too much to say about this really. If you've had Galaxy and Galaxy Caramel before, there are no surprises, it is simply that chocolate in a different form, and it's probably too expensive. But Galaxy tastes nice, so in any form it's good. At the end of the day, why not have Christmas themed chocolate? Christmas selection packs were a fond memory of my childhood, and clearly people buy themed confectionary, so what's the harm really? This Galaxy present was nice to unwrap. Then devour.