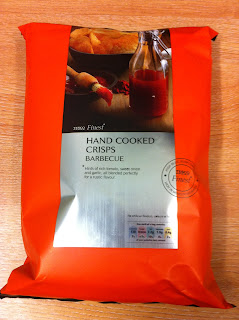 Is it barbecue? Or barbeque? After looking at those words for a while they both look stupid and wrong, but Tesco have firmly settled on the former with their Finest hand cooked crisps. When I first looked at these, despite the picture featuring barbecue sauce, I did wonder what exactly they meant by "barbecue" flavour. It doesn't say it's barbecue sauce, so for all I know I could be picking up a packet of crisps that tastes like hot crumbling charcoal, fire and metal.

They do in fact taste like barbecue sauce, maybe barbecue sauce that's been dropped into a barbecue and scraped up very professionally, but barbecue sauce none the less. It's a smoky flavour, and I liked it. Most barbecue flavoured crisps are paired with a meat of some kind. I don't like meaty crisps, because crisps aren't meat, and the texture and flavour is often all wrong. So to see these crisps offer me barbecue sauce flavours with none of the weird meat thrown in, I was excited, and in the end I was rewarded. They're certainly not my favourite crisps, give me some good salt and vinegar or Chilli Heatwave Doritos and I'll choose them anytime. But I did thoroughly enjoy this barbecue experience.