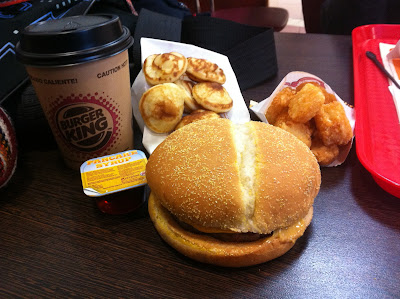 Now that school runs need to be done on a regular basis, my fianceé and I often have to nip to town in the times between drop off and pick up, meaning we get to town in the early hours of the morning. Since I still get up at the latest time possible before leaving the house, I regularly only have time to give the kids breakfast, leaving me starving by the time I get to town. Thus I have started buying breakfast, which I haven't really done before. Normally we opt for a meal in the Wetherspoons, but today it was time to test what Burger King had to offer.

I went for the Breakfast In Bread, because I like puns. It's regular breakfast burger fare, bacon, egg, sausage. All in all it wasn't too impressive, but it certainly did have that distinct flame grilled taste as far as the sausage was concerned, so I definitely enjoyed it more than a MacDonald's breakfast burger. Next time though, I'll probably go for the bacon double cheeseburger, which is so awesome that they serve it all day.

The sides are worth noting too. While MacDonald's hash browns are full sized, Burger King present you with several hash brown bites. While this does provide a larger proportion of crunchiness to potato, they do feel a little small, and are gone within a short amount of time. Still, they were quite nice, just not as good as MacDonald's.

The mini pancakes are weird too. It seems Burger King are afraid of regular sized breakfast foods. They're less like pancakes and more like deflated spheres. Thus the inside is a bit too fluffy for my liking, they're just too thick. At least syrup is provided, though obviously not maple syrup, as they've had to name it "pancake syrup". Still, they tasted like pancakes, so kudos to the king for putting them on the menu.

While not a perfect breakfast experience, it's probably one I'd try again. I certainly felt full after my feast, and the coffee didn't taste like crap either, so that's a bonus.