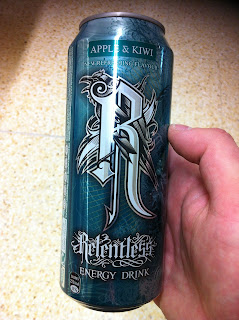 Yes, it's the second energy drink review of the week. Must they keep churning these out? It's so hard to resist. While it's true that I am a fan of regular Monster, there was a time when I was addicted to berry flavoured Relentless. The flavour was awesome, and it perked me up too. Good times were had by all. But here we have apple and kiwi, and while I hate real kiwis, I was certainly willing to give this a go.

Really, it tastes like Lucozade. A stronger version of Lucozade, sure, but Lucozade all the same. I probably only make that comparison because I've had quite a bit of apple Lucozade, but still, this Relentless is pretty nice. The flavour is pretty sweet, with just a slight sour kick. The kiwi is certainly present, but isn't too overwhelming. It was refreshing, and didn't have that aftertaste you can get with the regular non juiced energy drinks. While it's not quite my favourite of all time, it certainly is a pretty awesome flavour.