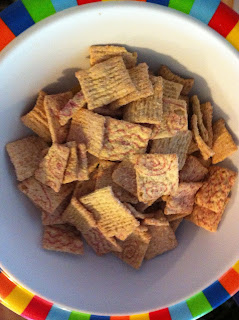 I already explained my long and complicated love affair with Golden Grahams in my second ever review, and also my life long hatred of Cinnamon Grahams, now called Curiously Cinnamon for some reason. That was all I thought I needed. The light side and dark side in my Star Wars of cereals. There wouldn't even be the nasty surprise of cinnamon turning out to be my father, because that's biologically impossible.

But today I stumbled upon a new addition to the family. Curiously Strawberry, they call it, not Strawberry Grahams. What ties does it have to the dark side? Apparently not too many, it seems light hearted enough,in its pink box, and the cereal itself even has swirls on it. How crazy. I did a dry taste test first, just in case there are some heathens out there who don't have milk on their cereal. Quite powdery to be honest, and the flavour was a little too sweet and overwhelming.

All that changed with the addition of milk though (seriously, why wouldn't you want milk?) I guess the best way to describe the whole experience is to say that this is basically crunchy cereal coated in strawberry milkshake powder. When you add the milk, you are left with a quite nice strawberry milkshake flavour with a crunchy texture. It's quite odd, and still a little overwhelming, but also quite delicious. Sure, it doesn't reach the godly heights of the Golden Graham, but it's a nice novelty, and a lovely addition to the range that detracts further away from those awful cinnamon things. So give them a go. They may surprise you.