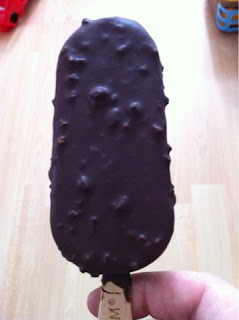 Ahh, Magnums. They're choc ices for grown ups, and they've tried to make them even more grown up over the years with the addition of different kinds of chocolate, swirls and nuts. Here we have the next step, perhaps the ultimate step? After all, it is called Infinity.

It's pretty much like a regular Magnum, but the ice cream inside is chocolate with some caramel swirls. Pretty damn nice, although the caramel isn't too noticeable. Then we have the outer shell, formed of dark chocolate with all kinds of nubby bits. Now, I'm no fan of dark chocolate, but while it was bitter at first it began to blend in with the other flavours and give a nice overall package.

If you're looking for the next step in the evolutionary ladder of choc ices, this is the one for you. It's very indulgent, and despite a couple of minor flaws it's a very nice dessert.