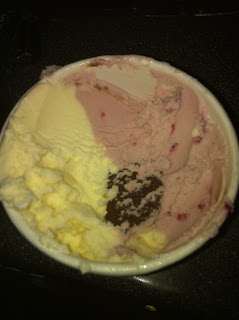 I do love Ben & Jerry's. Mostly because they give me a load of free ice cream every year at their festival, but also mostly because all their flavours are awesome. This one is no exception. Berry White is half raspberry ice cream, half white chocolate chunk ice cream, with a fudge core going right down the middle. So I guess the percentages are a bit more complex than half and half, but whatever.

Yeah, these core sundaes are pretty cool. I had one at the Odeon a while back, and I'm sure the core itself was warm, but obviously you can't accomplish this in the store bought varieties. As such I didn't really think too much of the fudge. Sure, it was nice, but mixed in with the two light flavours, the fudge just kind of sticks out as quite a dark, gooey flavour. I can't fault the ice cream itself. The raspberry in particular is smooth and flavoursome, and there are plentiful chunks in the white side. The fudge does add a certain something, but I get the feeling that I wouldn't miss it if it were not there. So while the ice cream is awesome, the slight intrusive quality of the fudge keeps it from a perfect score. I'm sorry Ben, Jerry. I still love you.