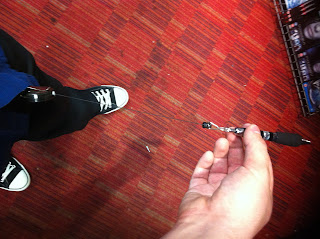 There always seems to come a time at work where I'm in need of a pen but I can never find one. So imagine my delight when I came across these babies in Poundland. There are two in a pack, and they clip onto your belt loops like they're part of some superhero utility belt. If you're, say, a stationary based superhero that is. The elastic stretched out to a comfortable distance, allowing you to write to your heart's desire before letting it reel back into place. Awesome, right?

Wrong. Have you ever tried writing with a pen that is constantly trying to ping back into your crotch? It's not particularly comfortable. Most of the time when I could have used it I was quite content with taking a few seconds to search for a normal pen, just to spare trying to write against the resistance. Even the idea of having it attached like a cool utility belt didn't last long, because when you walk around with it it flaps around like a small black penis. Oh yeah, and when I was showing off its elasticity, it broke. 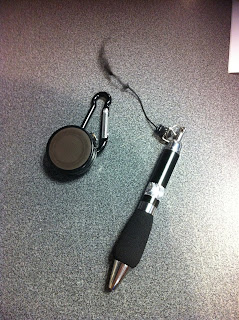 As my uncle Ben used to say, "with great power comes great responsibility". Still, it's a nice idea for people who seriously have trouble keeping track of their pens, and like to produce something from their crotch like magic. It's just, you know, not very well done because it's from Pundland.

It's the hero Gotham may deserve, but doesn't really need. It's a shitty pen on a belt clip.