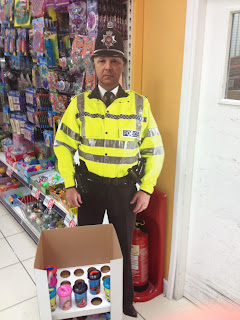 Holy shit, it's a policem- oh wait, no it's not, real policemen aren't two-dimensional, nor do they stand in the same position, with the same lifeless stare, for eternity. Now, I may be on the smarter side of the human race, so it might have been easy for me to reach that conclusion, but I'm pretty sure even the basest of animals do a double take at a cardboard version of their predators and realise they're not in any danger.

I know the stereotypical Poundworld shopper is not considered the brightest of the bunch, although I've no idea why, everyone should love the call of an "everything for £1" spending spree. But perhaps there is a correlation between the poverty levels associated with having to steal cheap shoddy products and the level of education received by the individual. I don't know, I'm not a scientist. But seriously, how do people think this is supposed to stop a shoplifter?

I assume the reasoning is that the perpetrator, a weasly, skinny, chain smoking job centre reject, would stroll in donning a puffer jacket, loading it up with cans of dubious foreign energy drink and tins of sausage 'n' beans. Upon skipping the entire toiletries section (they don't call them "filthy scroungers" for nothing), his eyes lock with this upstanding gentleman of the law, and he knows he's been rumbled. This man's been in trouble with the law before, because he obvioiusly spends all his benefit money on drugs and booze so he can get lairy with passers by. He's not going to chance a run in with the fuzz in the middle of the day, so before even taking the time to assess whether this policeman is real or not, a feat that takes a split second for us regular upstanding folk, he bolts out of the door, leaving a trail of dented cans behind him.

So thank you, cardboard policeman, for protecting our previous cheap stock from stereotypical idiots who probably don't exist.