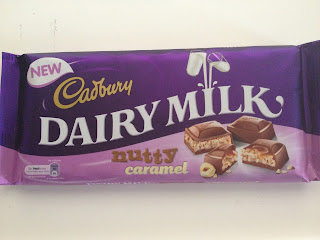 I had the opportunity to go to my out of town Sainsbury's today, so I popped in to look for the Cola Pretzel Honeycomb Marvellous Creations that has so far eluded me. Ultimately I would be disappointed in that respect, but I did come across this interesting bar of Dairy Milk. Apparently it's been out for a while, but is only available in Sainsbury's, which would explain why I never tried it. Anyway,s Nutty Caramel consists of your good old Dairy Milk chocolate, encasing a caramel flavoured filling, chopped hazelnuts, and more caramel for good measure. 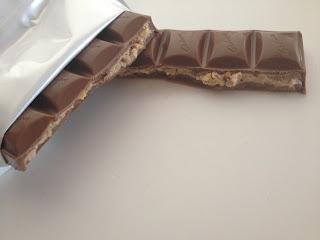 As you can see, the filling is akin to that of the Golden Biscuit Crunch, and since they were both released at the same time that kind of makes sense. I was expecting just a bunch of nuts and caramel shoved willy nilly into the centre, but the filling in this bar is delightfully creamy, with some nice caramel tones. I'm not normally a fan of nuts in chocolate either, but the hazelnut pieces are pretty small, and blend in with the texture and flavour very well. Overall it's another fantastic Dairy Milk bar. If only it was available more widely.