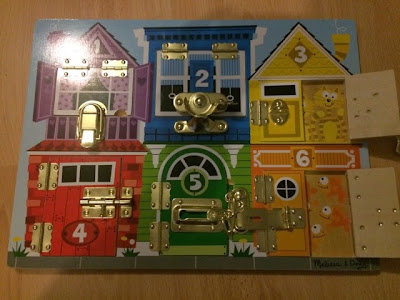 The festivities are all over, it's a new year, so now it's time to wade through the mountain of toys my kids got for Christmas. One that particularly caught my eye was this Latches Board from Melissa & Doug, which we gave to our youngest. It's basically a board with a set of wooden doors, behind which lie various numbers of cartoon animals. But to see them, you have to open a high quality metal lock, some simple, some not so much.

You see, if there's one thing toddlers like to do, it's opening doors and fiddling with any kind of metallic object or lock they find. While most companies would condone keeping potentially dangerous stuff behind locked doors, it seems Melissa & Doug want to train kids how to get into things. After playing with this, they can open all manner of latches and gates, so watch out for those kids in the back garden. Also, watch out for the next edition, which tackles combination locks and comes with a complimentary lockpick.

I jest, I jest, a little. It's a pretty fun toy. The locks are all pretty sturdy, and satisfyingly clunky and noisy. The animals inside are cute, but not too much of a reward for opening the doors. Still, it's about the journey, not the destination, and this is a great alternative to boring old wooden puzzles. It may be a little taxing for younger kids to open up the doors, but it's certainly something my daughter enjoys playing with.

Email ThisBlogThis!Share to TwitterShare to FacebookShare to Pinterest
Labels: Toys