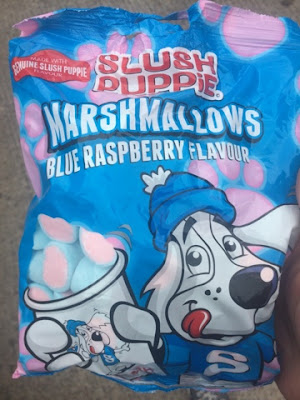 A little while ago I reviewed some Slush Puppie popping candy, amazed that things could be Slush Puppie flavoured that were not Slush Puppies. Turns out there's more where that came from, in the form of these Slush Puppie marshmallows. They're still the iconic blue raspberry flavour, I'm not sure when the other flavours get a look in, but this will certainly do for now.

There's not much to say, really. These are marshmallows that taste like blue raspberry Slush Puppie. The mallows themselves are nice and soft, not quite Princess standard, but still pretty pleasant to eat. As for the flavouring, it's not as strong as I'd hoped. The popping candy had a great burst of flavour, but the marshmallows just have a hint that doesn't last all that long. It's authentic, sure, but short lived. I don't know if I'd buy another bag, but they're certainly not all that bad. They are definitely Slush Puppie flavoured marshmallows, but they could have been a little better.