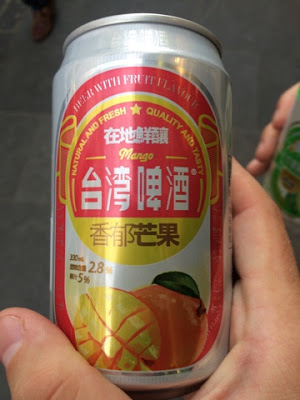 I took a trip to London today, so import food reviews abound for the next few days. One of the most interesting purchases first though, from my sojourn into Chinatown. Aside from a resplendent selection of sweet stuff, I couldn't help picking up this mango flavoured beer, even though I don't drink beer.

It's pretty much exactly what it says on the tin (can). It's a beer, and it tastes like mango. I normally hate the bitter taste of beer, but it's softened a lot by a bold, distinctly mango flavour. Overall, it's a sweet, satisfying drink that definitely has a beery edge to it, but it's not bad at all, and actually quite refreshing. If I were on a strange night out to a predominantly import based drinking hole, I certainly wouldn't mind getting drunk on this stuff. Tasty.