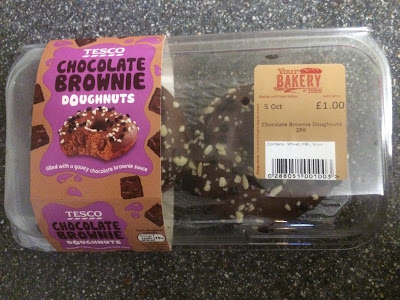 I reviewed Tesco's Strawberry Cheesecake Doughnuts last week and found them to be pretty average. I mentioned that there was also this chocolate brownie variety on offer, and indeed I went back and bought them, hoping for a better experience. These doughnuts aren't as funkily shaped, but they sure do look chocolatey. These consist of a chocolate doughnut with chocolate flavoured filling, topped with icing, brownie pieces and white chocolate nuggets.

I don't know how I expected these to be better than the cheesecake ones, especially when the cheesecake doughnuts had the proper ingredients. I mean, sure, there are some brownie pieces sprinkled on top, but the rest of just your standard chocolate doughnut. The topping isn't even that noticeable, and I certainly didn't have much of a brownie experience while eating. The doughnut itself is alright, a little stodgy, and it's certainly nothing new, it's been done before, and I know Tesco are capable of making a nicer doughnut. As for the filling, it's pretty much the same as the stuff they put in their regular chocolate doughnuts, a goopy, somewhat sickly mixture. Thankfully there isn't enough to leak all over the place, and the sauce does go some way to alleviating the dryness of the doughnut, but all together it just makes for a slightly disappointing doughnut. It's good for a chocolatey snack, sure, but there are better treats in the bakery.