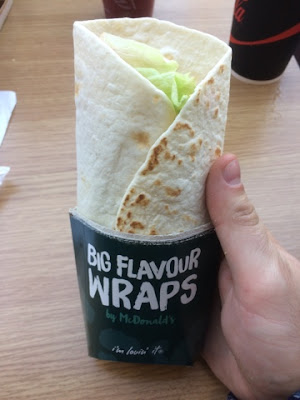 McDonald's have some new wraps, and this time they're "Big Flavour Wraps". Three out of four of them are chicken based, so I guess if the big flavour of your choice is chicken then you're good to go. But I wasn't in the mood for poultry today, and decided to go for the BBQ pulled pork. Hell, I'd probably have gone for it even if I was in the mood for poultry. It looked pretty good in the picture, but you may look at my picture and ask a very valid question. Where's the pork? 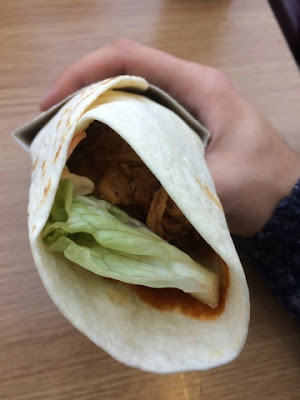 Ah, there it is, that sad looking lump of meat quite far down inside. Okay, sure, it doesn't look all that great, but that doesn't matter if it tastes good, right? Well, it doesn't taste all that good either. The pork is pretty nice, it's tender and has a nice hint of BBQ sauce to it, but there's not really all that much and it was kind of clumped together into a disappointing patty. The BBQ sauce I did taste was quickly overwhelmed by the coleslaw, which is quite bold and a little tart, and pretty much dominated my taste buds. There's a little bit of lettuce for some crunch, and the tortilla is alright I guess, but overall I wasn't feeling this. It could have been pretty good, but it seems to fall flat on all fronts. Next time I'll probably go for the chicken.