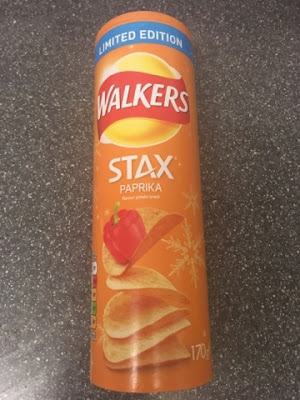 Crisps in a tube, what do you think of? The correct answer is Pringles, as Pringles is the only answer. Others have tried and failed, Pringles reign supreme, but that doesn't mean Walkers isn't going to have a go at it. So here we have Stax, Walkers crisps in a tube. I'm guessing they're a limited edition for Christmas, although I found them in the regular crisp aisle. I chose the paprika flavour, because they only ever seem to release new kinds of crisps in ready salted, some form of cheese/sour cream & onion, and spicy, and the spice would win for me every time. 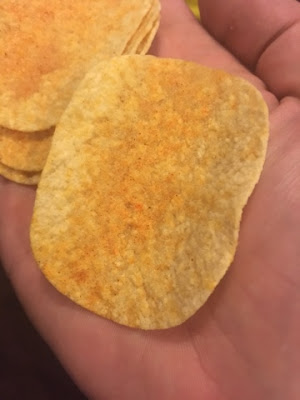 These look a little... misshapen? I'm going to compare them directly to Pringles, I don't think that's unfair, they're the standard all tube based crisps will be measured by. In comparison, the Stax are slightly thicker, which leads to more crunch than Pringles. They're also flatter, which I think loses them points against the other guys. Sure, they still fit on your tongue in the traditional way, but I sometimes like to flip Pringles upside down and place them horizontally along my tongue, it provides a satisfying hit of flavour (you know what I'm talking about, right?) Doing that with the Stax doesn't yield great results, it seems a lot of the flavouring is concentrated on just the one side. It's a minor complaint really, but it's one that makes me side with the Pringles. In all honesty though, these aren't bad, they're just nothing special. They taste kind of nice, not particularly spicy, but there's some good peppery flavouring in there, could do with a bit more though. I had no problem eating quite a few of these, but I must admit the whole time I was longing for Pringles. They're just better, and these don't stack up. Ha, get it? Stack? Stax? Okay, I'll leave now.