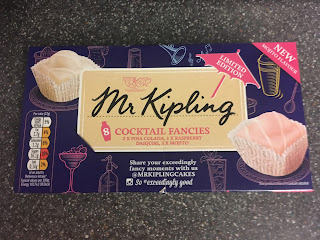 These Cocktail Fancies aren't new, I'm well aware, I reviewed them a couple of years back. But this year the cocktails on offer have changed, with the peach bellini being swapped out for the mojito. More of a classic cocktail, I'm sure, and I suppose it's nice to see a bit of mint represented instead of several fruits. I'm not a massive fan of mojitos, but I do see the merit in them. So without further ado, here is the mojito fancy: 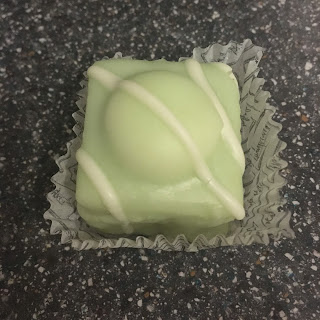 It certainly looks the part, but I have to say it's not particularly flavoursome. At its core it's the same classic Mr. Kipling fancy, a nice soft sponge and some great creamy icing. There is a hint of mintiness in there, and an emulation of the rum that isn't too bad, but it's just not that strong. Now, I'm not a mint fanatic, I'd rather have a less pronounced mint flavour than it overwhelming my senses, but this is just a little too subdued, with a bit more punch this could have been a pretty great cocktail flavoured cake. As it is though, it's just rather bland. The cake itself is nice enough to carry it someway, but I was expecting more cocktail. Oh well, maybe they'll swap it for something else next time.