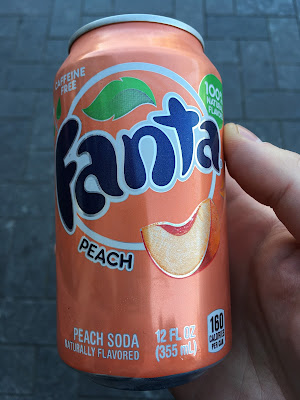 We don't have nearly enough Fanta flavours available around here, as evidenced by the different kinds of fruit flavours I find in import shops. This one hails from Amsterdam, but was part of the American import section of a sweet shop, so yeah, U.S. Fanta is plentiful. One of my favourite fruits is the peach, so I was looking forward to what this can had to offer.

Well, this is just peachy. With several of the American Fanta cans, I've found the flavouring to be far too sickly and artificial. This one is a lot better in that respect, I guess the "naturally flavoured" part is true. It's a very sweet flavour, so it does get a little sickly at times, but it's also pretty natural tasting, and refreshing as well. It's definitely peach flavoured, not the best representation of the fruit, but I'd say it's a pretty good offering. There aren't many peach sodas that I've found, to be fair, but I'd say this is one of the best. A good can of Fanta, worth tracking down.