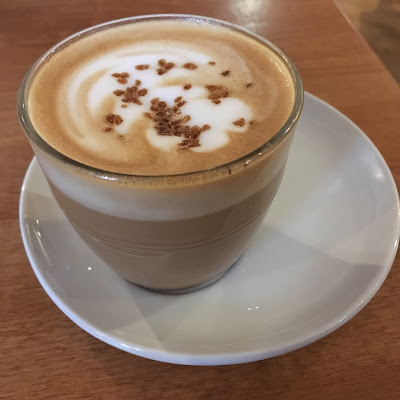 Costa have expanded their cortado range again lately, with the addition of this caramel variety. The mocha cortado made an appearance last year, and was a pretty good effort, so I was excited to see what this one had in store. If you haven't tried a cortado, it's a tiny coffee. Two shots, topped with a little bit of milk. This one also has caramel swirled into it, as well as caramel crumb, so I assumed it would be sweeter than your regular cortado.

This is definitely a sweet addition to the range. The caramel flavour is pretty thoroughly mixed in, it can be tasted in each sip. The caramel crumb is a fairly good addition, it adds a nice little crunchy texture with an extra burst of flavour. It can, admittedly, get a bit sickly at times due to the extra caramel in the crumb, but on the whole this is a pretty good coffee. Underneath the caramel is a nice intense hit of coffee, mixed in with some good, creamy milk. I still prefer the original cortado, but this is something a little different, it's nice to see the range expanding.