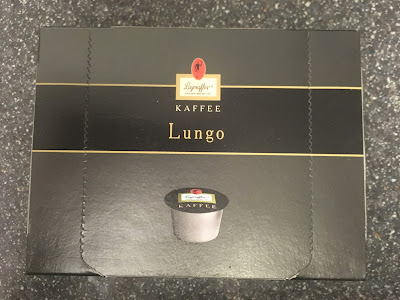 Here's another one of the variety of capsules I was sent by Leysieffer Kaffee. These ones provide a lungo espresso, and my quick Googling of all these terms has made me some form of espresso expert, in my opinion. A lungo is a result of passing water through the grounds for longer than regular espresso, which is the opposite of the ristretto I reviewed yesterday.

A prolonged blast of water lends to more acidity in the espresso, according to what I've read. but it's also true according to what this stuff tastes like. It's a fairly bitter shot, and it's somewhat watery, but the coffee flavour is ever present. It's not as intense as the ristretto, but has a kick to it. This isn't exactly the best espresso I've had, but I'd say it's still less bitter than those I've picked up from Starbucks. For a less intense, but slightly more bitter experience, this is a pretty nice capsule.