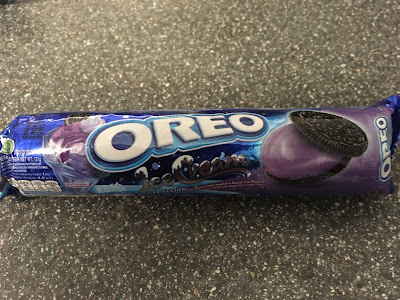 Here's another acquisition from the American import shop I found in Amsterdam. They're ice cream flavoured Oreos! But why is the creme purple? Why, because it's blueberry flavoured of course! You know, that old classic blueberry ice cream, a staple alongside vanilla and chocolate. I know, I guess they've already covered the basic ice cream flavours in other Oreo varieties, and the idea of a blueberry ice cream creme wasn't too bad. So I got stuck into these.

Something went wrong here, quite wrong. These are not nice. The creme is just weird, it doesn't really taste like ice cream, the blueberry isn't authentic, and it has this kind of minty freshness about it that really doesn't work well with the flavour. The biscuit is the same old Oreo goodness, but it's not enough to distract from the awful filling. Probably the worst Oreo variety I've tried, I'll be wary of any ice cream ones popping up in the future.