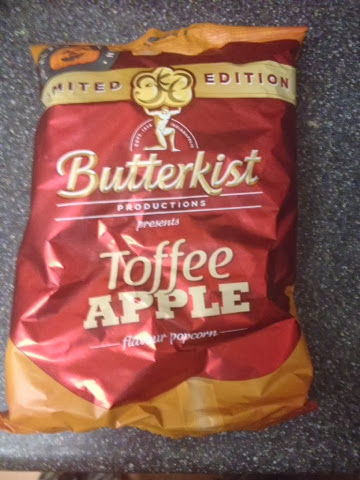 I now present the last instalment of my Halloween trilogy. Well, it's the last of the three Halloween products I bought the other day, there may be more to come, who knows? Anyway, it's another limited edition flavour, a toffee apple flavour popcorn from Butterkist.

Toffee apples are a staple food of Halloween and Guy Fawke's Night, but I've never really bought into them. Sure, the coating on the apple is nice, but once you've bitten off all the skin you're just left with a disappointing apple on a stick. Thankfully, Butterkist have done away with all that healthy fruit nonsense, and made their toffee popcorn all apple flavoured. It's as simple as it sounds, but it's actually a pretty neat idea. The popcorn itself is as sticky and crunchy as always, and the apple flavour is actually very nice, blending in with the toffee nicely. It is, perhaps, as little bit too sweet, lending a somewhat artificial taste to the experience, but I certainly enjoyed it as a nice change from regular toffee popcorn. If you like toffee apples, or popcorn, or both, you can't go wrong with this one.