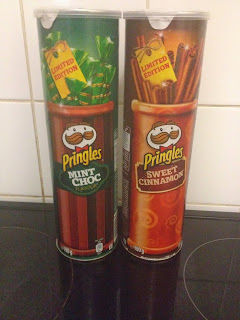 Christmas is coming, and that means time to bust out the Pringles, share the tube around, and inevitably be the family member who has to squeeze their hand right into the tube to get any decent amount of crisps... I've had some bad experiences, okay? But Pringles are hoping to lighten my mood again by presenting me with some interesting limited edition flavours, in the form of mint chocolate and cinnamon.

Yeah, you heard me right, mint chocolate crisps. I'm not talking actual chocolate, like those Pringle shaped Cadbury Snaps that were around years ago. I mean mint chocolate flavoured potato chips. Does that sound disgusting? I thought so too, especially as I'm not a fan of mint chocolate. But hey, I had to try them, and to their credit, they certainly taste like mint chocolate. There was a slight chocolatey hint when I first started chewing, that soon gave way to a very intense minty taste, much like a mint Aero. Coupled with the crisp texture, though, it didn't come together all too well, and while they're certainly not as awful as I expected, I felt there was something off about them. Perhaps people who enjoy mint chocolate will get more of a kick out of these, but I won't be buying another can.

I was looking forward to the cinnamon flavour even less. I have told before of my long standing dislike of cinnamon, so to sprinkle it on top of crisps was a bizarre and disgusting thought. But, upon trying these cinnamon Pringles, I was very impressed. They're certainly sweet, and that sweetness does become a little overwhelming at times, but there's also a certain spiciness to the whole affair that actually goes really nicely with the crisps themselves. I was reminded of paprika Pringles for some reason, but obviously a far more sweet version. So while not perfect, the cinnamon is definitely my favourite flavour of the two, but it's not quite up there with the classic Pringles flavours.

So there you have it, two weird and wonderful (or not so) Pringles flavours for the festive season. These certainly are original ideas, and they're pulled off quite well, but I think they're just a little too weird for me to enjoy fully. They're certainly worth trying though, so grab some before they disappear.
Posted by A Review A Day at 15:59