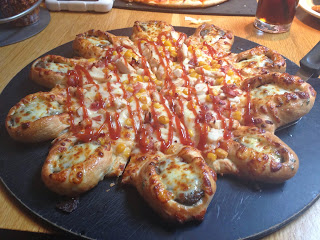 Have you ever been eating pizza and wished you could have been eating something else? Well, Pizza Hut have covered your pizza/hot dog crossover cravings, and have even managed to squeeze meatballs inside their pizza crust. "Whatever next?" people cried in dismay and disgust (probably), and indeed, how could the stuffed crust possibly evolve any longer? Pizza Hut has answered that question with a resounding "cheeseburgers".

That's right, cheeseburgers. In a pizza crust. Many would look down upon such a pizza in disgust, but I looked down and saw opportunity, the opportunity to gorge myself on two of the most delicious offerings of modern fast food in one sitting, and probably increase my risk of heart disease. But I don't care. I love pizza, I love cheeseburgers, and I've been eagerly anticipating chowing down on this crust since it came out in the Middle East. 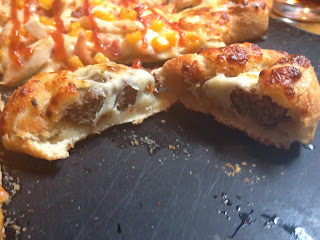 Only available in large, the cheeseburger stuffed crust pizza comprises of ten slices, each with a small, perfectly formed burger patty wrapped up in doughy pan crust, topped with cheese. The patties themselves, while 100% beef, aren't exactly the Aberdeen Angus offerings you'll find at established burger joints. It seems like they're made of the same ground beef that you can order as a topping, which is pretty smart from a cost effective point of view. As such, the burgers are quite soft, not very chewy, and still have a kind of distinctive "pizza topping" taste to them, but they are attached to a pizza, so it's not all bad. The crust surrounding the patties is pretty good too. It's not your average burger bun, but it still works, bridging the gap between pizza topping and burger.

So really, these burgers aren't as tasty as they could be, but let's face it, if you are willing to pay good money for a massive pizza with cheeseburgers baked into the crust, you're probably not a gourmet food critic. What we have here is a neat idea for a new crust, executed pretty well, considering Pizza Hut don't do burgers. It's not the best crust they've ever done, but I certainly enjoyed it. I look forward to seeing what they think of next.