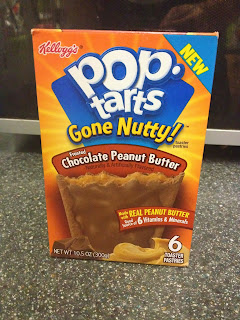 Pop Tarts are probably one of the most exciting breakfasts you can have as a kid. Forget chocolate cereal, chocolate Pop Tarts were where it was at. Chocolate, pastry and frosting, all in one? All the sugar a small child could desire. But in recent years the Pop Tart population of this country has dwindled, leaving us with a meagre selection of flavours. The strawberries and chocolates just don't cut it any more, especially when you see the vast array of delights that the Americans still have. Where's my blueberry? My cinnamon? My cookies and creme? Well, you can probably get them at your local import candy store, and you'll pay a somewhat hefty price for doing so. But that's exactly what I did when I picked up this box of Chocolate Peanut Butter Pop Tarts at Cyber Candy. 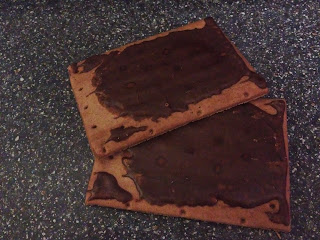 How could I resist? Chocolate and peanut butter is one of the greatest flavour combinations known to man, but to stick it all on top of a pastry that you heat up and eat for breakfast? Can't be beat. Excuse the aesthetics of the pastries themselves. They may not be as good looking as the artist's impression on the box, in fact it looks like a lacklustre and uneven spread of frosting. But it's what's inside that counts, and what's inside is peanut butter. 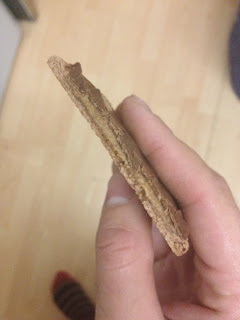 The box informs us that these Pop Tarts contain "real peanut butter", which is a relief, because I'd hate to see what fake peanut butter tastes like. As you can see above, the peanut butter actually comes in the form of a nice thick helping, buried deep within the Pop Tart itself. So really the exterior is misleading, and these pastries actually contain a satisfying amount of filling. Where all three flavours combine, it turns out the proportions are just right, and they're pretty damn tasty. If you like your chocolate and peanut butter, now you have an excuse to eat them for breakfast. Well, a more acceptable one anyway.