Adorning my Twitter, Facebook and Google+ profiles (I know, super social media guru) is a picture of a quite random selection of items. It is supposed to be representative of the array of things I review on this blog, and while I have indeed reviewed the R2D2 cookie jar and table fans, I certainly haven't reviewed the rest specifically. Well, now it is time to delve into the literary classic present at the forefront of my profile picture, Roger Hargreave's Mr. Uppity. 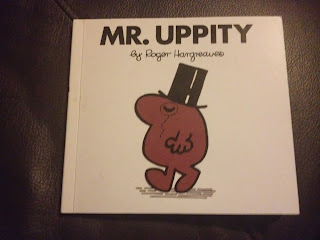 
Mr. Uppity spends his days wandering around and being rude and uppity to people. But one day, that changes, as he encounters a goblin in his garden, and promptly tells him to go away. The goblin, in return, works a spell on Mr. Uppity that shrinks him: 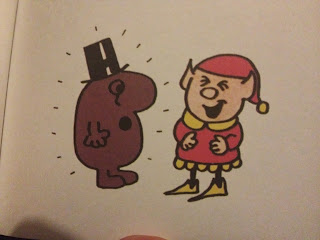 Now, Mr. Uppity doesn't appreciate being tiny, and so is led to the Goblin King, who allows him to return to normal, but on the condition that is he is ever rude to somebody, he will quickly shrink again. So, through a magical form of operant conditioning, Mr. Uppity learns not to be rude to people, for fear of having his entire molecular structure shrunk over and over again. But that's okay, because once Mr. Uppity stops being a dick, people start to like him, and that makes him happy. 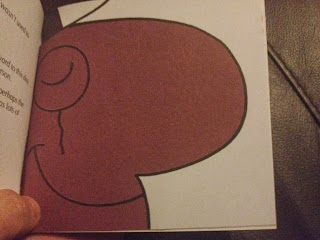 So there you have it kids, the moral of the story is not to be rude to people, or else goblins will make you shrink. While the first part of the moral is pretty sound, the second is pretty ridiculous, but this is coming from a guy who wrote books where Mr. Greedy is scared slim by a giant, and Mr. Mean is tortured via magic until he becomes less mean, so I guess anything goes.

But, all in all, this is an entertaining book for the kids. The pictures are big, bold and happy, and while the threat of goblins in the real world is negligible, it is nice to have life lessons put across in an entertaining, magical manner. Mr. Uppity is a good addition to the Mr. Men range, and while it may not hold up to other classics like Mr. Happy and Mr. Small, it's still good fun.