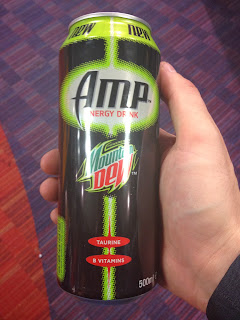 Amp, short for Ampere, is defined as "the constant current that will produce an attractive force of 2 × 10–7 newton per metre of length between two straight, parallel conductors of infinite length and negligible circular cross section placed one metre apart in a vacuum". Obviously it's the perfect name to slap on an energy drink. Alright, all jargon aside, it's a buzz word for electricity, and energy, and guitars and stuff, so here we have Mountain Dew's Amp, an energy drink that is apparently set apart from their already established energy drink.

I must admit that I'm disappointed by Mountain Dew's presence in the UK. I'm a big fan of the original, iconic American drink, but all we have over here are weird tasting energy drinks. This one is no exception. It states that it's "citrus flavoured", but it doesn't taste like any citrus fruit I've ever had. After swishing it around my mouth for a while, like a mediocre wine taster, I concluded that this drink actually tastes like pear drops, and last time I checked, a pear is a pome fruit, not a citrus.

But yeah, this drink tastes like pear drops. Watered down, caffeine infused pear drops. It's not exactly undrinkable, but it's certainly not very nice. I did quite the energy kick from drinking it though, so if you're overly tired and for some insane reason this is the only energy source around, by all means give it a go. Otherwise, I wouldn't recommend it. Come on Mountain Dew, you're letting your image down. Release the good stuff over here, so I can stop paying import prices for it.