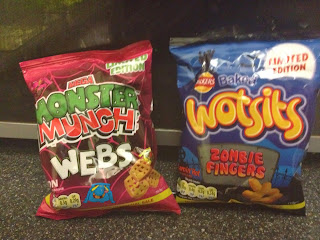 I've been avoiding these crisps for some time now, as they seem to be quite lazy products rushed out for the Halloween season, regular flavours rehashed with fancy packaging. But as I got to thinking, I realised Flamin' Hot Wotsits haven't been around for a while, and I don't think I've ever had bacon Monster Munch. So I delved into a packet of each to see if they were worthy as spooky treats.

As you can probably guess, these are pretty much the offspring of the recently revived Wotsits Wafflers and Monster Munch. They have the same shape and flavour as the Wafflers, which means they're not really that web-like at all, and bacon doesn't strike me as a particularly spooky flavour, but they're certainly edible. The Monster Munch parentage becomes apparent due to the texture. They're quite light and crumbly, as other flavours of Monster Munch are, which means that these soon get reduced to a mushy, bacon mess. I was afraid my apprehension with buying these crisps was well founded, as there's really nothing too special about these bacon webs.

Thankfully, my mind was changed by the Zombie Fingers. They actually have less prominent curves than regular Wotsits, so the finger analogy holds up well. As for the taste? Fantastic. They're not overly spicy at first, but have a delicious saucy flavour, that almost brings me back to the days of spaghetti flavour Monster Munch. The flavour hangs on long after the crisp itself has gone, with a lovely spicy aftertaste that kicks in. It's a shame I didn't try these sooner, because after Halloween tomorrow I probably won't be able to find any. I dub them my favourite Halloween themed crisp of 2013. I knowe there wasn't much competition, but these Zombie Fingers are delicious.

That rounds up some spooky offerings from Walkers this year, one nice, one not so nice. A trick and a treat, if you will. So if you're looking for some last minute spooky snacks for your Halloween party, you should certainly pick up some Zombie Fingers.