I am primarily a console gamer. I have poured hours and hours into RPGs and shooters, some taking upwards of 40 hours to finish. But a simple game on the iPhone is looking to take up so much more. That game is Angry Birds.

Angry Birds is the utmost evil of video games. Play time is very short, less than a minute for any given level. But you're bound to be playing the same level tens of times until you actually get it right. What started out as a minute's play can quickly turn into an hour, but your mind still thinks that it's not too time consuming. Angry Birds has remained in the top iPhone app charts for as long as I can remember, and over 50 million people have downloaded it. That's pretty much Wii sales figures, and it was only available on smart phones until a couple of months ago. That's pretty impressive.

The premise of Angry Birds is simple. 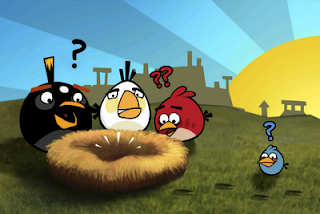 There are some birds, and their eggs are missing. Turns out, some green pigs stole them, so the birds launch a kamikaze mission to destroy all of pigkind by destroying themselves in the process. Probably not the brightest of ideas, but they're birds without wings, they're probably inbred and not the most intelligent. 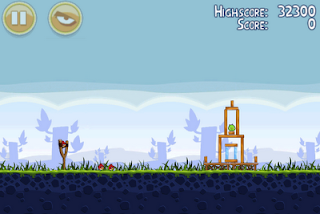 Here's the first level. You've got a red bird, in a catapult, and a pig in a wooden fortress. The aim, of course, is to catapult the bird into the blocks, topple it over and hopefully destroy the pig. It's a physics based game, so making a perfect shot takes a lot of fine tuning, but it's easy to wreak havoc just by launching a bird anywhere in the target area.
The red bird is pretty boring though. It just goes where you throw it. As you progress through the levels, you get new birds to play with. Like the yellow one, that speeds up if you touch it in midair, or the blue one, that splits into three and can smash through ice blocks easily.
But wait, there's more. There are fat white birds who drop an egg bomb when you tap the screen in midair, then fly off deflated to cause a little more destruction wherever it lands, or the fat black bird who smashes through stone blocks before exploding in an awesome fashion.
Finally, you have the most recent additions, the boomerang bird, which turns back on itself in midair for a sneaky back attack, and the big red big brother bird, which will absolutely smash whatever it lands on 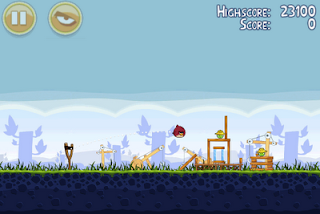 Needless to say, once all these birds have been introduced and used, you start to get a combination of them to use throughout the later levels, and all in a particular order.
That's the appeal of Angry Birds. It's easy to start, fiendishly difficult to master. Even if you manage to destroy all the pigs with all the birds you're given, you might only get a one star rating for your efforts.
To get three stars you need to make sure you cause the most destruction you can with the least birds possible, and this is where most of your time is spent. First figuring out which birds to fire where, and then spending several tries getting them all on the right trajectory. If you're a smart phone toilet gamer (86% of Angry Birds players admitted to playing on the toilet according to recent research), the people you live with will start to fear for the health of your bowels.
So, you've spent several hundred hours of your life shooting birds at pigs and you've finally got three stars on all the levels. You have beaten the infernal game, there is nothing more it can throw at you. Oh wait, here, have a new game mode. 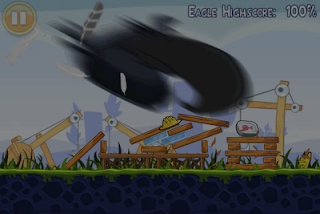 Is it a bird? Yes. Is it a plane? No, it's a bird. This is the Mighty Eagle, a recently added extra bird that chases a can of sardines you throw and obliterates everything in its path. A good way to clear those levels you can't quite do, you might think. But no, to conquer the Mighty Eagle mode you have to make it so the bird destroys every single block on screen. What fresh hell is this? I spent the good part of an hour last night getting 100% destruction on one level, and that wasn't even on my phone. I hate you Angry Birds, but you make me love you so much. Do Android users dream of electric birds? Probably. They're taking over my head all the damn time.
My rating: 5/5
Posted by Dan Bishop at 06:28