I would've liked to herald my return to Pizza Hut as an anniversary of sorts, but sadly my 60th post was yesterday. But according to Wikipedia, "Sixty-one might be the largest prime that divides the product of the next two primes plus 1". So that's pretty special. So, happy 61st post. To celebrate, I returned to my origins and got the new Pizza Hut pizza, the Deli Americano.


For once, it kind of looks like the picture. I saw a video where a woman makes the picture for McDonalds burgers, and they don't even cook the meat, so this is most likely the cooked equivalent of what the picture shows. I'd like to point out here that when I opened the box, I was confronted with the hottest Pizza Hut pizza i've ever had. I couldn't even pick it up for the first minute. But as we all know, delivery pizza boxes are fitted with special cooling rods that react once the box is open, rendering the food freezing cold within 15 minutes, so soon we were good to go. 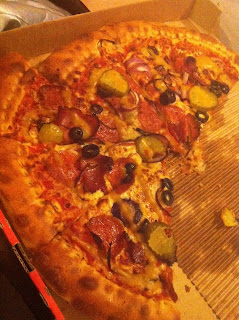 My phone battery had died, so by the time i'd charged it up and taken a picture I was almost halfway through. But it looks like Pac-Man in a pizza costume getting ready for a mighty big nom, so I am pleased. But listen to me prattling on, I haven't even told you what's in it yet. Pastrami, pepperoni, gherkins, onions, black olives and a mustard drizzle. It may seem a bit odd to stick a New York deli sandwich on top of a pizza, but somehow it works. The result is nice, and tastes just like a New York deli sandwich. If you replaced the bread with pizza. There is a distinct lack of pastrami, which is normally massively stacked in the sandwich counterpart, but the pizza retains enough flavour to give that authentic taste, and the gherkins and mustard complement it perfectly. This is a good pizza, but at the end of the day, if I wanted to eat New York deli pastrami that bad, I would go out and get it on some rye. I congratulate Pizza Hut on a sterling effort though. Also I didn't get any dessert this time, 'cause that probably would've been shit.
My rating: 4/5
Posted by Dan Bishop at 13:03