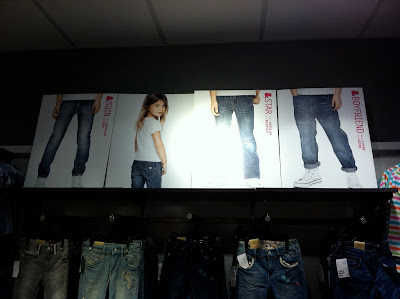 Hey look, it's one of those massive panels they put in clothes shops to show how your ass will look in dem jeans. Except this one's for 9 year olds.

Okay, I'm sure it's not that laden with sexual references or body image standards. Oh wait, yes it is. Let's take a look at your first option, it's called "Sqin". How do you pronounce that, like "sequin"? Oh, no, like "skin". 'Cause they're skin tight jeans for your little girl. You know who wears skin tight jeans? People who want to draw attention to their legs and ass. You work it, young daughter of mine.

On the right is probably the worst case. They're called "Boyfriend". I don't know the reasoning behind that, but my first assumption was that that's how it would look if you slipped on your boyfriend's jeans post coitus. I could be jumping to conclusions there, but come on, why are they called "Boyfriend"? Just call them "loose". But then I suppose it wouldn't be right for young girls to wear loose jeans, unless they're fat or something. H&M don't like fat girls, because if you manage to go for the third option, with a "regular" waist, you will, of course, be a "Star". And not have to wear your boyfriend's jeans because you're too fat for your own.

I don't like it, if you couldn't tell. I guess girls want to dress like their mums, but we don't have to transfer all the symbolism over to make it look right.