Today's Review: Dinner At The Queen B

There's a nice little pub/restaurant near my parents' house named The Queen B. The menu has been overhauled many a time in the last few years, with the whole place being shut down for a large chunk of time, but it's always been a nice place to go and eat a meal. Sure, it's not the best restaurant ever, but it's cheap.

Whenever I used to go to The Queen B, I ordered the mixed grill. That's presumably because I just wanted as much meat in me as was humanly possible with the menu I was given, and it was much meat that I received. This time, however, I was after something different. Nothing too adventurous mind, not that there is anything remotely adventurous on an average British pub/restaurant menu (apart from a hot curry, oh my, how Indian of you). So I went for the "Mega Beef Burger" 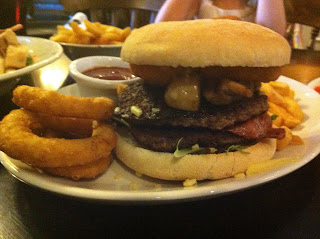 For once I was mightily impressed by a pub burger. Look how stacked that thing is. Two 4oz burgers, bacon, onion rings, mushrooms, good lord it's a lot of stuff. More onion rings on the side too, and I truly dig onion rings. It also came with a pot of Heinz Firecracker sauce, which I've never before had the pleasure of experiencing. It's basically a spicy barbecue sauce, which is a bit odd at first, but it soon grew on me. The burger itself was pretty damn good. Even with all the stuff in there, nothing seemed out of place, all the flavours blended together nicely. I was left feeling meatily satisfied, perhaps more so than with the randomly placed cutlets of the mixed grill.
But another reason I didn't go with the mixed grill was to save room for the dessert. The Queen B is godly in my eyes for serving one of the best desserts ever. They have the normal selection, fudge cake, ice cream, brownies, profiteroles. But if you couldn't decide, they also had the "Chocolate Monster", that had a bit of everything. Absolutely amazing. Sadly, they seem to have taken a healthy approach to the latest menu, or maybe a cost effective one, because this dessert was nowhere to be seen. Tears were almost shed.
But a new challenger appeared. The "Tuck Shop Ice Cream Cake". Chocolate brownie layered with chocolate mousse and ice cream, topped with "tuck shop classics". My mind immediately conjured up an image of a cake with Flying Saucers and Dib Dabs stuck in the top, and as weird as that seemed, it sounded pretty damn good. But it was not to be. 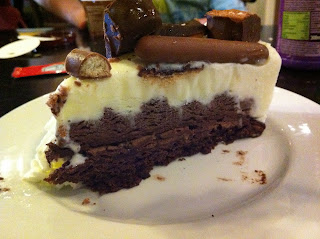 Swiss Rolls, a Finger and half a Jaffa Cake. Hardly "tuck shop classics". Where are the Refreshers? The Drumsticks? To console myself I concluded that it would probably taste weird with all that random crap on top, and so I tucked in. It was damn good. Creamy, chocolatey, and while it pales in comparison to the Chocolate Monster of yesteryear, it was an awesome idea for a dessert.
All in all, a good meal. Cheap too, came to just under £10 for both courses. I left feeling satisfied, though slightly full of chocolate. I shall visit again next time I want a nice cheap meal, and by then I hope they've come to their senses and can provide me with a diabetes-inducing dessert to be proud of. But good show, Queen B, good show.
My rating: 4/5
Posted by Dan Bishop at 15:58