Well, around five years ago, that is. I've been four times since then, so one could say I'm a bit of a Sundae On The Common veteran, especially due to the fact that I can validly moan how it cost me £5 to get in the first time compared to the £17 a ticket I shelled out this year. But it's still worth it, because it means free Ben & Jerry's all day long. But there are other things too.

There are band, sure. What festival would be complete without bands? The Sundae lineups have always been a bit low key. They've always managed to pull in someone quite well known to headline though, and while today saw performances from Gary Numan and Maximo Park, I didn't particularly pay too much attention to the music. Mainly because these guys were with me: 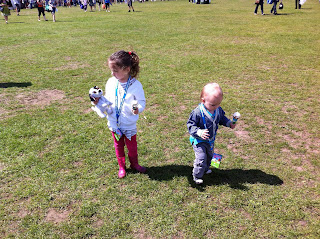 Amelia is a good kid, she basically doesn't run off, she's well trained. Alex, not so much at the moment. I'm sure his time will come, but right now he just likes to run off in random directions. So a lot of our time was spent chasing him down, fighting off ice cream related tantrums and cleaning up the aforementioned ice cream. And there was a lot of ice cream. Dotted around the field are various marquees, each of which is host to two or more different Ben & Jerry's flavours. You line up, get a free scoop of your choice and go on your merry way. You can do this all day long. It's an all you can eat awesome ice cream buffet. The only problem is that obviously the queues can be quite massive, but at the start of the day, and at the end when people start to leave and watch bands, it's quite easy to walk in and out within a couple of minutes. Needless to say I ate a lot of ice cream. I pretty much love every flavour, though Phish Food is my favourite. The most elusive of the day though, was this: 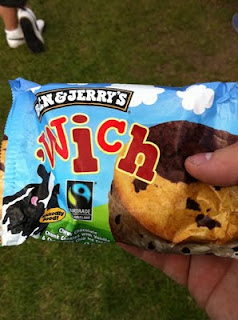 'Wich hasn't been on sale for a little while, but now it's coming back. There were a few women handing out whole 'Wichs from baskets, but they were elusive and ran out quickly. I managed to snag two though, 'cause I farkin' love 'em.

So yes, there is ice cream. Lots of ice cream. And while you can make up the price of the ticket in ice cream consumption alone, it is getting harder now the prices are rising each year. But fear not, there is much more to do. There's a petting farm, helter skelter, carousel, toe wrestling,  and many other activities peppered around the place. These activities are where the festival really shines through. There's an absolute ton for kids to do, which makes it a really nice family oriented event. The best part for the kids was the play area tucked away in the corner, boasting a marquee full of toys, a magic show, balloon animals, face painting and a bouncy castle: 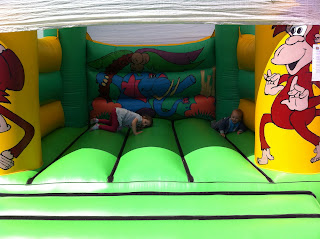 We spent the better part of two hours in there. The kids actually stayed in one place for once, and it was great to see them have so much fun with the wealth of toys all over the place. But soon it was time to go and get more ice cream, 'cause ice cream is awesome and we all love it.

Sundae On The Common is basically the best festival I've been to. I used to go to V, but I've found that nowadays it's full of complete dicks and is an entirely unpleasant experience. Sundae is a breath of fresh air. Everyone seems to just be having fun, especially the growing number of kids we see from year to year. The addition of free ice cream just makes it so much better. Ben and Jerry deserve all the praise they can get, so I would definitely recommend this day out to anybody I meet. But don't all come at once, I don't want to wait too long for my ice cream.