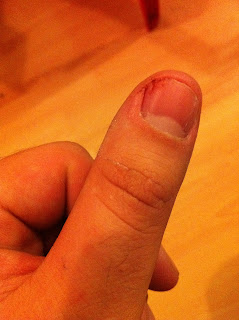 What is wrong with this picture? I'll give you a hint. My damn thumb nail is split. This has never happened to me before, and I used to cringe when someone informed me that one of their nails had split open. How do you even do that? Well, I'm still not sure.

I was at work, using the scanner gun. It gets a bit boring sometimes, so I like to add a bit of flair, twirling it around, throwing it from hand to hand. But during one of these innocent little hand passes the scanner instead whacked into my thumb nail, immediately splitting it and causing it to bleed. I'm not sure how that's even possible. It didn't even hit it that hard. Either the laws of physics were bent for a split second or I'm not getting enough calcium in my diet, and my nails are brittle shadows of their former selves.

Anyway, thumb injuries suck. I wrapped it in a plaster and spent the rest of the evening acting like an invalid. There's something about wearing a plaster that makes you feel like you can't do anything with the affected area, and it turns out that thumbs are pretty useful. Worst of all, it doesn't work on the iPhone screen, so whenever I was texting I had to use a thumb and an index finger, so I looked like some kind of idiot who's scared of technology.

But the plaster's off now, and the cut isn't too bad. It stings from time to time, but I don't think I'll be catching it on anything much. It still sucks balls though, and I still have no idea how it happened.