Today's Review: The Amount Of Wires Behind My TV 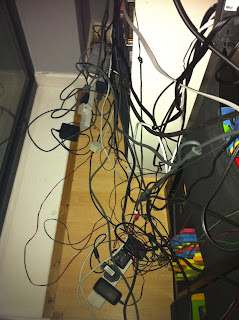 Just look at that. Just look at it. It's insane. Basically we painted the living room today, and decided to rearrange the shelving again, which is fine from a furniture moving point of view, there's only three cabinets. But when you take into account all the rewiring it becomes quite a massive task.

I suppose it's my fault, I have so many things plugged into my system simultaneously, but it makes everything convenient and easy to access. Let me break it down for you:

That's 30 damn wires, and I'm sure I'm missing some. It would be okay if they just stayed where I put them, but due to some unknown force of nature any wires left alone will become inexplicably tangled. In fact, I dropped a wire onto the floor earlier, turned around for a second, and when I turned back it had tangled into another one. Baffling.

That's why I like to have all my stuff plugged in at the same time. Going back there and switching cables around just to play a different console is a nightmarish thought. So despite the sheer amount of wires lying around back there, I can play and watch my entire collection of games and movies with a couple of remotes. And that's awesome.