We had a little trip to the seaside today. Certainly not the best day for it, but hey, we had fun. But before beachery, there was Pizza Hut, and with those unlimited refills a man's gotta go. So imagine my surprise when I walked in and saw this: 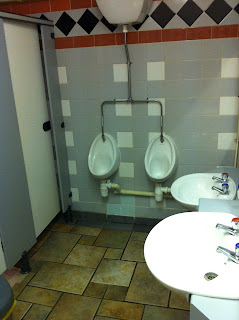 I'm sure most of you have played the urinal etiquette flash game online. If you' haven't, here it is. Basically the rule goes that men standing at urinals should normally be separated by one to avoid unnecessary junk watching. This bathroom does not only ignore that rule by having only two urinals, but laughs right in its face by placing the two urinals directly next to something else.

It doesn't bother me too much, I'm not a urinal user myself. I much prefer the comfort of solace and toilet paper that a cubicle provides. But imagine if someone was in the first cubicle, or it was out of order. I would be forced to go in the one next to the wall. If someone decides to try and dissolve the urinal cake while I'm inside, the first thing I'm greeted with upon leaving the cubicle is an eyeful of someone else's junk. If I wasn't paying attention I might even bump into them and disrupt the stream. You never want that to happen.

The other urinal isn't positioned better. It's right next to a sink, meaning if one person is washing their hands, and another is peeing in the urinal, cleaning yourself is not an option unless you want to rub up against a guy with his tackle out. Add to this the fact that the sink requiring you to snuggle up next to an exposed man is actually the child's sink, and you've got a recipe for disaster.

Maybe I shouldn't be too hard on them, maybe this is the best they could do with the space they had. But on the other side of the sinks, out of shot, is a massive radiator. Could they not have positioned that next to the urinal and moved the sinks further up? I fear the cubicle situation is unavoidable, but they could easily rectify the sinks. But alas, these toilets are massively cramped, and I'm sure they will be the source of much male awkwardness and invasions of personal space for years to come.

Email ThisBlogThis!Share to TwitterShare to FacebookShare to Pinterest
Labels: Places