You don't get anything that's much more English than a car boot sale. When Americans want to sell loads of crap, they just put it on tables in their front yard for a day or two. But English people? None of that, that's too easy. We have to get up at 5am, load all of our stuff into a car, drive to a field and lay it all out, and hope that it sells when there's nearby competition from loads of other people. People love going to boot sales to buy things too, it's pretty much an English Sunday tradition to get up early, go and buy someone else's crap, go home, have a roast dinner and then go to sleep.

Anyway, I love boot sales because I love finding bargains, especially of the nerdy variety. One of my most prized finds is an Um Jammer Lammy figure that I bought a few years back for 50p, fackin' bargain. Today I was on the lookout for a SNES, but it was not to be. I did take £100 with me though, I was sure I wasn't going to spend it all, but after buying some toys, lending some out to my mother and buying some drinks, I came home empty-walleted but with these: 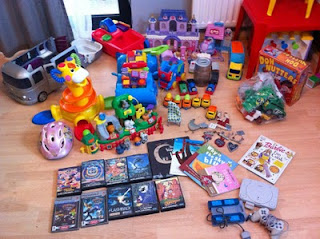 Did I say some toys? It was more like an entire carful of toys. I spent £75 on this lot, which may seem like a lot to fritter away at a car boot sale, but if I were to buy this stuff new it would cost a hell of a lot more. I got a PSOne for £4, loads of cheap Megadrive games, and the toys were stuff that we have been looking for on eBay, but at a fraction of the price. You see, while eBayers want ot get rid of their stuff, they're probably not too fussed about it, 'cause they can always list it again at a lower price if it doesn't sell. But people at car boot sales? They've paid quite a lot of money for their pitch, and they want to make that amount back, plus profit, and not leave with a load of crap that they came to get rid of. So things are cheap, pocket money cheap, and there's always room for haggling.

So car boot sales are awesome. I would go to one every week, but I work some Sunday mornings, and also my financial situation would simply not allow it. Because if there's one bad point to boot sales, it's that it's easy to spend far too much. Not having been to one in four years, I was happy to part with quite a bit of cash for some true bargains. But I certainly wouldn't make a habit out of it. Please visit car boot sales responsibly.