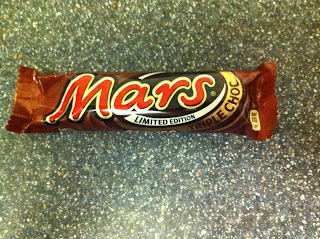 Ever eaten a Mars Bar and thought "Hey, this could use more chocolate"? No, me neither, but someone apparently has because here we have the triple chocolate Mars. It's chocolate nougat with chocolate caramel, covered in chocolate. That's a lot of chocolate.

But they have taken away the essence of the Mars Bar, being the malt. The malt sets Mars apart from any other bar, and they've just added in more chocolate and turned into some kind of chewy chocolate goop. Essentially it tastes a little bit like a slightly melted Charleston Chew. It's by no means a bad thing, but I was expecting more of that Mars texture out of this bar.

Also it's confusing, seeing as a Mars in England is actually the same bar as an American Milky Way, while the English Milky Way is called Three Musketeers in America. So now to have an English Mars that tastes like yet another American chocolate bar is just aggravating the situation. But it's a limited edition, it'll all be over soon. But for now we have this quite nice, if slightly gooey and sickly, triple chocolate bar.