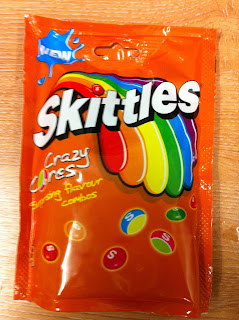 I am a sucker for new variations in sweets. Especially when they're reduced in price, and especially when they say "crazy" in the title. So imagine my joy when I found these new Skittles sitting in the aisle, at half price no less. Soon after they were all up in my mouth.

There have been quite a few variations of Skittles. The sour ones are pretty common and awesome, but I've also dabbled in some imported tropical variety, and some kind of other theme that I forget the specifics of. All of them have been pretty awesome, because Skittles are pretty awesome in themselves. They're always very juicy, and very moreish. Crazy cores are no exception.

What makes them crazy? Well, each colour Skittle has two flavours, both in the shell and the chewy centre if the picture is to be believed.I have yet to nibble off a shell to see if it's true, because I cannot be bothered to invest much time in it, and I don't really care that much. I certainly would if one of the two flavours was disgusting, but these are right on the money. In the lineup we have mango and peach, cherry and lemonade, melon and berry (which berry I'm not sure), blue raspberry and lemon, and strawberry and watermelon. I was skeptical about whether they could pull it off at first, and it may be due to the power of suggestion, but each colour tastes pretty much exactly how it says on the bag. Except for the cherry and lemonade, which tastes more like a cherry bakewell. But still, they got the cherry right.

So if you're a fan of Skittle and want to change up the game a little bit, grab yourself a bag of Crazy Cores. They have that same Skittle-y juicy taste, and the new flavours are awesome.