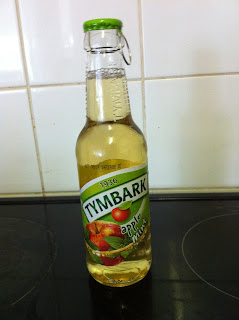 I was feeling in the mood for something different today while food shopping, so I took a quick glance at the "ethnic" aisle, where I laid eyes upon a fancy juice in a glass bottle. Only 50p too, bargain. Apparently there was meant to be an apple and cherry flavour too, but they were all gone, so apple mint it was.

I'm not generally a fan of mint in things, and the thought of having mint in a drink was pretty off-putting, but I am always willing to try new things. Thankfully it wasn't a bad experience. The mintiness is certainly not overwhelming. You can taste it, but it's clear that this is an apple juice first and foremost. It wasn't too refreshing, something just didn't sit right with me as far as the mint was concerned, but that's my own personal taste. But it was quite nice. It's like drinking apple juice, but with a minty fresh feeling afterwards, like you've just brushed your teeth.

So if you like your drinks minty, but not too minty, grab yourself a Tymbark.