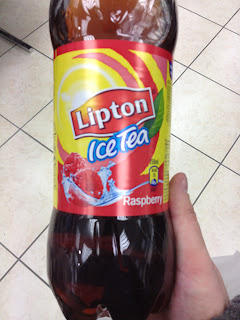 I don't see Lipton Ice Tea in many places around here, after all, we're British, the only type of tea acceptable is hot. Leave this cold, fruity stuff to the Americans. Still, I'm not overly British, and whenever I find a bottle of peach Ice Tea I tend to snap it up. Today I found a raspberry version, so obviously I wasn't going to pass up trying it.

While I do enjoy the peach flavour, it does feel a little dry in the throat, which I guess is one of the side effects of effectively drinking cold tea. This raspberry flavour has the same effect, but it feels more at home here, as drinking most raspberry flavoured drinks leaves a little bit of a dry aftertaste. The raspberry itself is quite a bold and nice flavour, it's just the tail end which is isn't too great. Still, I think I prefer this to the peach version. It may not be completely refreshing, but it is a tasty drink.