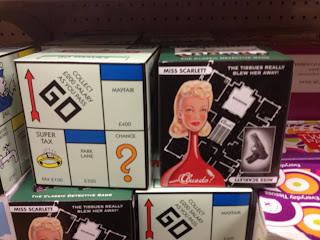 Have you ever been playing a game of Cluedo or Monopoly and thought "I love this game so much that I'd like to expel mucus into it"? Well, Poundland have you covered. Because now, instead of wrapping that game board around your face to catch the fluids streaming out of it, you can use tissues from these board game themed boxes instead.

Really, why would you want these? I guess it would be nice for when you're playing the corresponding board game. Like if you mercilessly beat someone at Monopoly, and they start crying, and then you offer them one of these, and you're like "Oooooh, burn!" But then you'd just be a douchebag.

So there you have it, board game tissues. For douches and people who want to murder Colonel Mustard in the nasal cavity with a giant bogey.