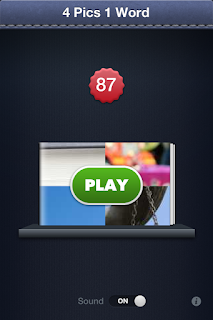 Forget your Songpops and Draw Somethings, this appears to be the new game spreading its way round Facebook. The quite aptly titles 4 Pics 1 Word is an app that does just that, gives you four pictures and requires the one word answer that links them all. 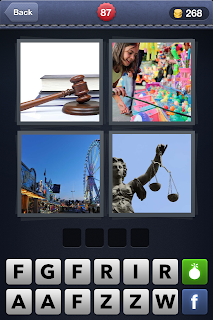 Most are quite straightforward, others are somewhat cryptic or not particularly well done. Seeing as all the images seem to be taken from stock photo websites they seem to have done quite a good job of putting them together, but some of the links between the images are tenuous at best. But to help you along the way you can choose your answer from a variety of provided letters.

The letter choices are presented along the bottom, much like Draw Something. You also have the opportunity to get rid of some of your choices, much like Draw Something, or to place one of the correct letters in the answer for you. Either option costs coins, which are accumulated by guessing questions correctly, or by emptying your wallet like an impatient idiot.

Yes, like most smartphone apps nowadays, the aim is to coerce you into spending real life money in order to progress farther into the game. But before you start paying, there's the option to share the picture on Facebook and get some hints from your friends, although the real reason this button exists is to promote the game among your friends and potentially draw in a less than frugal sucker who will sink their wages into some fake alphabet explosions.

But despite all that, it's not a bad little game. Like most of its type it can be somewhat addictive, but it is very limited at the moment. When the game starts up there's a "Play" button which takes you to your latest unsolved puzzle. There's no way to look back at ones you've done, or any kind of tiered level system where you can try something new if you're stuck. I guess this just promotes the idea of spending money to get further in the game, but even that notion is a bit messed up here. Most of these types of games will have friends battling it out to get ahead, but from what I've seen the level placements are completely random between different people. So if I tell someone I'm on level 56, they might only be on level 35, but with a fair few cryptic and difficult levels under their belt that I'll surely get stuck on later. The sense of competition should be a major factor in driving up the sales of coins for letter bombing purposes, but it just seems like it's gone a bit wrong here.

4 Pics 1 Word is a nice little picture game that can inspire a fair bit of thought from the player. In its current incarnation though, it's quite bland. The linear pathway through the levels with no backtracking option, the skewed competitive element and the underdeveloped rewards system just make the overall experience not very exciting. Still, it's obviously becoming popular, so I imagine updates will be made at some point. Probably not for the best, but still, it's something.