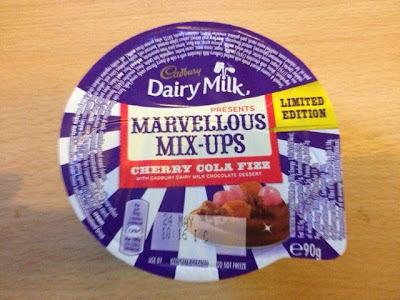 Cadbury have brought out some interesting varieties in their Marvellous Creations chocolate line, but apparently bars aren't enough for them, as they've also gone and made chocolate bags and desserts with some interesting mixed up flavours inside. I picked up this Cherry Cola Fizz creation today, and since the Cola Pretzel Honeycomb bar was one of my favourites, I was quite looking forward to it. 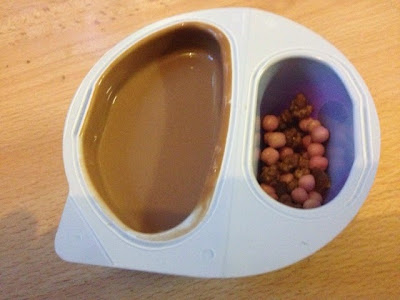 This is your standard creamy Dairy Milk dessert that you see in the Flake or Buttons pots, but with an interesting side of chocolate cereal clusters, cherry flavour cereal balls and cola flavour jellies that you can swirl in. Each piece has its own distinct flavour, but the balls and jellies are quite bold and sickly. Together it does taste like cherry cola, but artificially so. Even mixing the pieces in with the chocolate doesn't help that much. It's an interesting combination of flavours, but it just doesn't come together all that well. This is certainly an edible dessert, but the balance is a bit off, and it just seems more mish-mashy than marvellous creation. But then, I'm not a massive fan of these twin pot desserts, so maybe I was biased from the start. This Marvellous Mix-Up is an interesting idea, but I'm not that big a fan.