Recently there has been a surge in interesting pastry combinations, from the Cronut to the Duffin, and also an increase in savoury snack flavours, where once there were only sweet. I've sampled bacon and curry popcorn, but nothing could have prepared me for Tesco's new bakery treat, which combines both these fads into one unholy combination. I give you Weirdoughs: 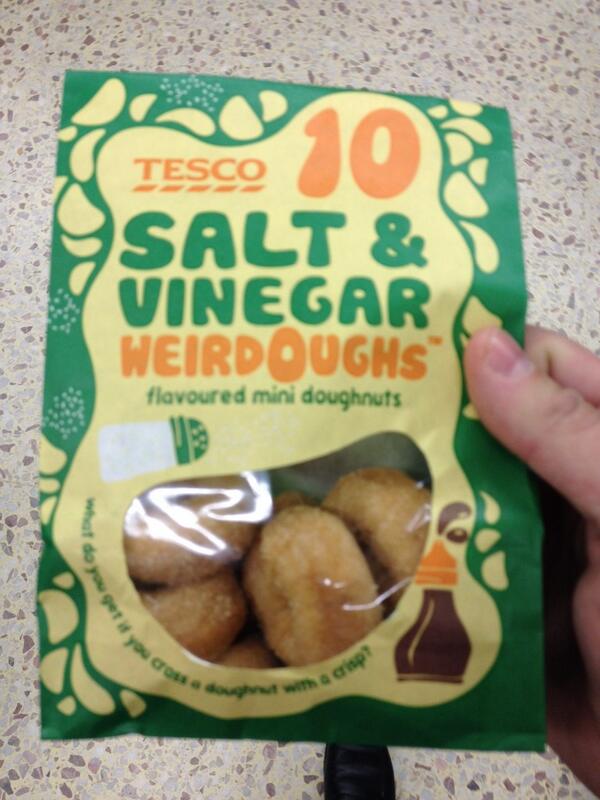 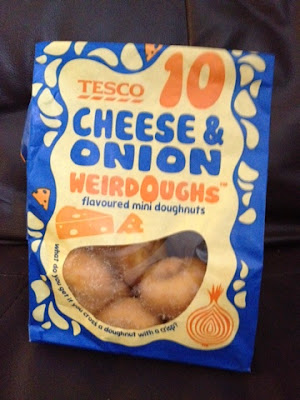 Many thanks to The Cocoa Nut for informing me of the existence of these strange treats. I happened to be heading to Tesco this morning, so I rushed straight to the bakery to try these out. These are touted as a combination of crisp and doughnut, which sounds a bit disgusting texture wise, but in fact they are just Salt & Vinegar and Cheese & Onion flavoured doughnuts, which just sound disgusting flavour wise. But when was I ever one to pass up on a strange food? I tucked right in.

I started out with these ones, since they're my favourite of the two crisp flavours. There certainly is a hint of salt and vinegar throughout the fluffy doughnut, but it's not very strong. The sweetness, and fluffiness, of the dough overwhelm the savoury a bit too much, so while I got a fleeting taste of something quite interesting, it didn't last too long. Still, they're nice doughnuts, they could just do with a bit more flavouring.

I wasn't going to pick these up, since Cheese & Onion is among my least favourite crisp flavours. But I can't give an informed review without trying everything on offer. Surprisingly, my wary purchase paid off. These doughnuts, somehow, are very nice. The cheese and onion flavour is much bolder than their salt and vinegar counterparts, and somehow it works well when paired with the doughnuts. It does take a bite or two to get used to the taste, and I don't think I could eat too many in one go, but this is definitely my favourite flavour of the two.

Tesco have imagined what a mixture of crisps and doughnuts might taste like, and these Weirdoughs are exactly the answer. While the Salt & Vinegar variety could do with a bit more flavour, there are authentic crisp flavours infused into these doughnuts that are unlike anything I've had before. Weirdoughs are a bit weird though, and I doubt they'll be taking over your glazed and jam filled any time soon. But if you want something different in the bakery aisle, look no further.