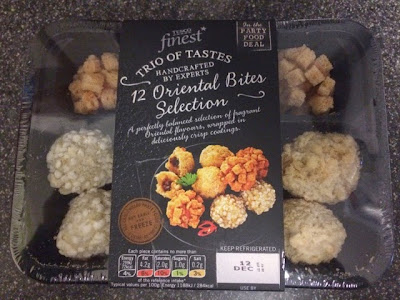 It's time to go back to the party food, although I'm yet to have a party. But hey, I'm always partial to some bite size goodies, so I used the vouchers I was sent by Tesco to pick up these oriental bites. They're like Chinese food, but like, backwards and spherical. Or like scotch eggs with a very oriental twist. They come in three varieties: Prawn and rice bubble bites, chicken katsu bites and chicken satay crouton bites. All very nice sounding, but how do they work in ball form? 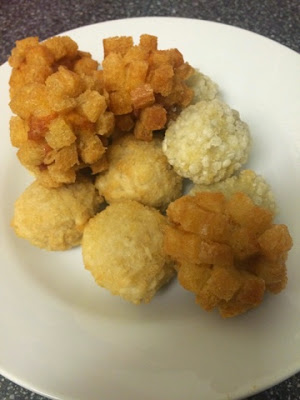 Well, they certainly looked good coming out of the oven. The most visually striking one is the satay crouton bite, surrounded with crunchy croutons, like a blocky, 8-bit hedgehog. The inside is nice and creamy, with a citrusy hint, with a nice meaty texture added by the chicken. That's when I could taste it anyway, as the croutons are pretty overpowering. Crunchy, and nice, but they do drown out the rest of the nice flavours.

As for the chicken katsu, they're probably the most bland looking, with a simple coating that doesn't really get in the way of the inside. There's a lot of meat in these, and a nice bit of sauce in the middle. Definitely tasty and creamy, but there's a little too much chicken for my liking, and overall it becomes a little bland and dry.

The prawn bubble bites were a nice change after the chicken. A slightly crunchy coating on the outside, with a change of texture inside, and some rice thrown in for good measure. They're also very aromatic, with a nice hint of spice, but there's some lemon grass tossed in that really overwhelmed the senses. It may have been nicer in a smaller quantity, but as it stands it just seems a bit off.

These bites are all employing some great ideas, it just seems that the recipes are a bit off. While they're all pretty tasty, there seems to be one element of each that's just a bit off, that overwhelms the others. With a bit more balance these could be great, but as they are they're just alright. If you're fond of Chinese food, though, by all means pick them up, you may disagree with me entirely.