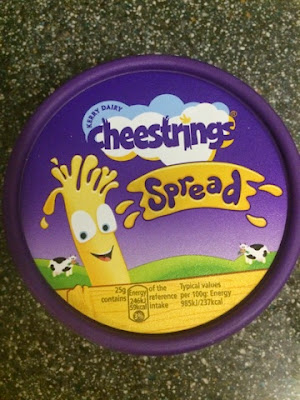 Well, this spread is okay. It pretty much tastes like Dairylea, but as far as cream cheese is concerned, it seems that the Cheesestrings guys have sided more with the cream. It's pretty sweet and creamy, but it's certainly more spreadable than Dairlyea, so I'll give it more points for that. It really doesn't taste like Cheesestrings though, just another generic cheese spread. Not that it's bad, it's just decidedly average. There are plenty more nice cream cheese options out there, and this is just another one piled on top. It's certainly not awful, but it's nothing special. It's good to spread, and it tastes alright, so it will probably be good for any kids who point it out during the weekly shop. All you grown ups should probably stick with Philadelphia though.