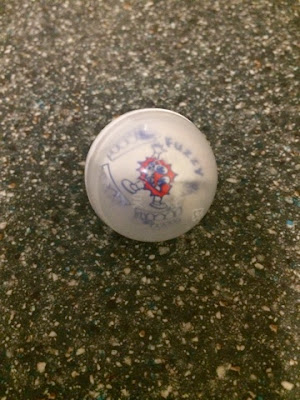 Let me paint a picture for you. It's the end of a long night's clubbing, or the conclusion of a nice date at the movies or a bowling alley, or let's say somewhere else with toilet facilities. Upon emptying your bladder, you spy the little vending machine by the door. You may be tempted to pick up a prophylactic, or a little blue pill, depending on what you think your chances may be. But you also have the option of a chewable toothbrush. Perhaps you had too many onions in your hot dog earlier, or you've drunk so much that your body decided to reject it right back out of your face. Either way, this little lifesaver could be the difference in wooing the lady with fresh, minty breath, or seeing her flee in terror at your dirty pie hole. I said I'd paint a picture, but it's more of a rough sketch. I can't say I have much experience with having to buy disposable toothbrushes from condom machines, but the other day I figured I'd go for it, and here it is. 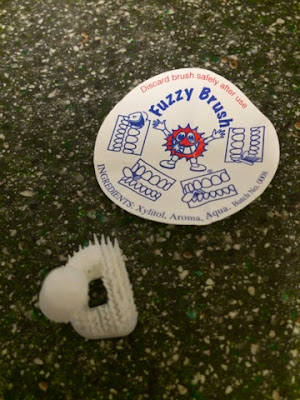 Yes, a chewable toothbrush. The idea intrigued me, though I wasn't sure how exactly it would differ from, say, a piece of gum. Turns out it does differ quite a lot, as it looks like half a bear trap that could be hidden really well in the snow. A polar bear trap, perhaps. I wondered why it took such an odd shape, thinking it wouldn't matter once it was all chewed up anyway. But while this toothbrush states it is chewable, it doesn't actually change state. The aim is to roll it around your teeth, squeezing it with all your dental might, in order to release some minty stuff contained within the bristles. The helpful instruction disc shows you how to do that, and I actually didn't find it too hard to reach most of the surface area of my teeth. The backs were tricky to get to, but I managed to do a pretty good job. It was easy enough to tell where I'd rolled this thing to, as it leaves behind a pretty fresh, minty finish. In that respect, I was surprised. It looks like a gimmick, but it actually works somewhat effectively. I was left with a minty fresh mouth, although to be honest I didn't have particularly dirty teeth to start with.

I don't know how this brush would hold up to dirtier teeth, but I assume it wouldn't be that great at picking bits out from in between them, who knows what kind of things some people are shoving in their mouths in night clubs. Also, despite being left with a minty maw, it didn't feel all that different from eating a piece of gum, and I think I'd much rather be seen chewing on gum than manically swilling a piece of plastic around my teeth just to brush the right spot. Still, if you're stuck for options, and find yourself with terrible breath in a bathroom, this does do the job. But you'd get the same effect for much less effort if you just planned ahead and carried some gum around. This brush is okay, but I don't think I'll be trying it again.