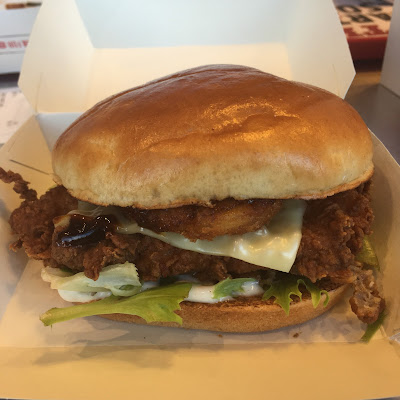 It looks like KFC are going down the same road McDonald's have with the Great Tastes range. KFC's version is the Southern Legends tour, four burgers to be released over the next eight weeks, starting with this Texas Ranch. It consists of an original chicken fillet, Monterey Jack cheese, a hash brown, lettuce, deluxe BBQ sauce and ranch sauce.

I was pretty excited for the ranch sauce, because ranch is a pretty great dressing. Unfortunately it's not as good as I'd hoped. It's nice and creamy, sure, but it's not particularly packed with ranch flavour, especially with the BBQ sauce overwhelming it. The BBQ is good though, smoky and sticky, which works really well with the chicken and hash brown. I wonder what it would be like with just the ranch sauce present, but I fear that might be a little too bland. As for the rest of the burger, it's pretty much a Fillet Tower in a brioche bun. The main difference here is the sauces, and they're not pulled off particularly well. A perfectly edible burger, but I was expecting something a bit more unique to start off this promotion. Hopefully the others will step it up a notch.