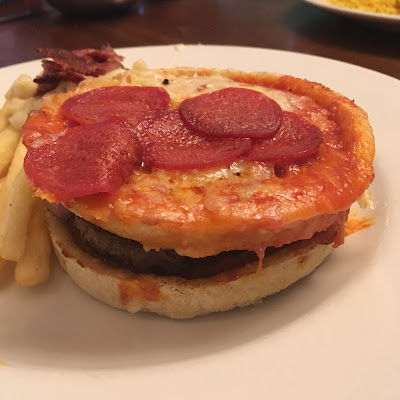 Pizzas for burger buns. It used to be the stuff of dreams, and then only the stuff of over the top internet food shows. But now you can experience the pizza bun at your local Hungry Horse. I would try to employ some fancy words to describe it, but just a look at the picture gives you all you need to know. It's a burger, but instead of buns, there are pizzas. Also it's topped with pepperoni, and it has bacon in it, just because.

I was looking forward to this as soon as I saw the menu, it's a dream come true, two fast food wonders combined in holy matrimony. But the reality wasn't particularly great. I know Hungry Horse isn't best known for its fine cuisine, but I figured they could put together a better quality burger than this. The beef patty tastes like one of those frozen Birdseye ones, while the "buns" are basically like the mini Chicago Town pizzas. It seems like I could probably pick up the same ingredients from the frozen aisle at Tesco and make my own burger for a fraction of the price. The pizzas weren't particularly well done (I like a somewhat crispy crust), and overall the marriage of pizza toppings and burger just isn't particularly fantastic, it's just like having a pizza with a big hunk of meat on top, except you're eating the whole thing with your hands. I appreciate the experimentation, and to be fair it's not a truly awful burger, it just seems cheaply put together, and just isn't all that tasty.